This month, September 2021, the lights of Broadway will turn on again after its longest period of darkness in history. The theatre is a place where we tell stories and where we connect… So this month’s Sparks all celebrate the magic of Broadway and the performing arts!  We find our stories in the stories we see on stage. But perhaps most important are the people of the theatre – “the theatre kids”. Kids who are self-proclaimed theatre kids may see themselves as a little different (in a variety of ways). And almost always, other theatre kids accept them as they are, without hesitation. There is no group of people more accepting, than people in the arts.

This month’s books not only highlight Broadway, but are stories of acceptance, bravery and determination. These are topics that will surely spark creativity in yourself and in your students. Be sure to download the accompanying pages for a more in-depth look at each of the books that I summarize below.

The Chance to Fly

As the dedication reads, this book is “for every kid who has a dream, even if the odds are against you, don’t ever stop finding ways to fly.” Co-author Ali Stroker made history as the first person in a wheelchair to appear on Broadway. She has also won a Tony Award for her incredible work and talent. Thirteen-year-old Natalie uses a wheelchair for mobility, yet never lets it stop her. Obsessed with musical theatre, Nat is cast in her first show: a production of Wicked. There numerous curveballs that threaten to derail her and the production! But she never stops in her determination to see it through to opening night.

Representation for all, despite culture or ability, is so incredibly important. This book is amazing in reminding us of that. There are just enough reminders to put yourself in someone else’s shoes without making things heavy. You’ll forget that any of these kids have any differences at all! It’s also a great reminder that we all experience the same feelings of growing up, friendship issues, and first crushes. The book is a musical theatre lover’s dream, filled with references throughout the book. (For the biggest of musical theatre fans, it will be a fun challenge to find and identify them!)

You can’t help but fall in love with Nat and her band of Broadway-loving fans. No doubt you will be rooting for them until the very final page as they find their group… and their voice. Book by Ali Stroker and Stacey Davidowitz.

This book is the first in a mystery series about a squad of young musical theatre actors. Mandy Gonzalez, a Broadway powerhouse and unbelievable talent, has written a novel that blends the world of musical theatre with suspense and mystery. Set in New York City, 12-year-old Monica arrives to fulfill a dream of being cast in a Broadway show. Only after arriving to town, she discovers the theatre the show is set to open in is cursed. As the curse threatens the show’s opening night, it is Monica who seems destined to break the curse… thanks to the strength of her family lore and culture, theatre traditions, and her cast mates and new friends.

Theatre fans will love the references. And mystery fans will be surprised by a twist at the end of the story they likely will not see coming.  The author is the founder of #FearlessSquad – a social media movement centered on inclusiveness and belonging. She also released a song by the same name. Book by Mandy Gonzalez.

Better Nate Than Ever

Middle school isn’t easy. Throw in being extra small, and someone who feels like a misfit in his own family, and who is constantly being bullied at school. Nate wants out of the small town he lives in and dreams of the bright lights of Broadway. Thanks to the help of his best friend Libby, Nate escapes to NYC for what is supposed to be one afternoon, to audition for a musical. Of course things don’t go as planned! And so Nate begins an adventure that leads him home in a way he never could have imagined. Along the adventure, we are right there with Nate as he confronts family issues, the effects of bullies, and his own journey discovering his identity.

Written with wit and humor as well as a great deal of heart, readers will be rooting for Nate. And with a true cliffhanger ending, they will be running for Five Six, Seven, Nate, the next book in the series. Book by Tim Federle.

Hattie in the Spotlight

What could be better than lovable animal characters and friendship? Throw in the theatre! Hattie Frog and her friends, Sophie Mouse and Owen Snake, learn that a play is going to be done in a brand-new theatre in their town. Even better – they are able to audition! Hattie is known for being shy and doesn’t know if she can do it. A look inside a production both onstage and backstage, which also gives us a story about friendship and sacrifice, this book is one of a series.

It is perfect for beginning chapter book readers with its short but descriptive sentences or chapters. It will also make a good read-aloud for the youngest readers, who may not be able to read on their own yet, but are learning about longer stories and chapters. Book by Poppy Green.

Alphabet books are not just for the youngest readers! This delightful book is a theatrical tour from A to Z, and a book that readers will read multiple times. There is so much information shared that it is impossible to absorb all at once, along with some amazing quotes from Broadway legends. A colorful, inviting collection of illustrations will have your students wanting more. And without a doubt, even the most knowledgeable students will learn a new fact or two! Book by Harriet Ziefert.

In the words of August Wilson himself: “I don’t write for black people or white people; I write about the black experience in America. And contained within that experience, because it is a human experience, are all the universalities.” August Wilson is largely considered to be one of America’s greatest playwrights, but his journey wasn’t easy. Growing up in a time where racial prejudice was at the forefront in America, bullies would target Wilson because of the color of his skin. After struggling to gain the education he desperately wanted, he would spend his days at the Carnegie Library in Pittsburgh, teaching himself.

The language in this book is peaceful, quiet and powerful. It is in two acts, like his plays, with scenes that depict his story. There are many layers to this book that are useable in a variety of ways, along with connections with multiple ages and grade levels. Book by Jen Bryant. 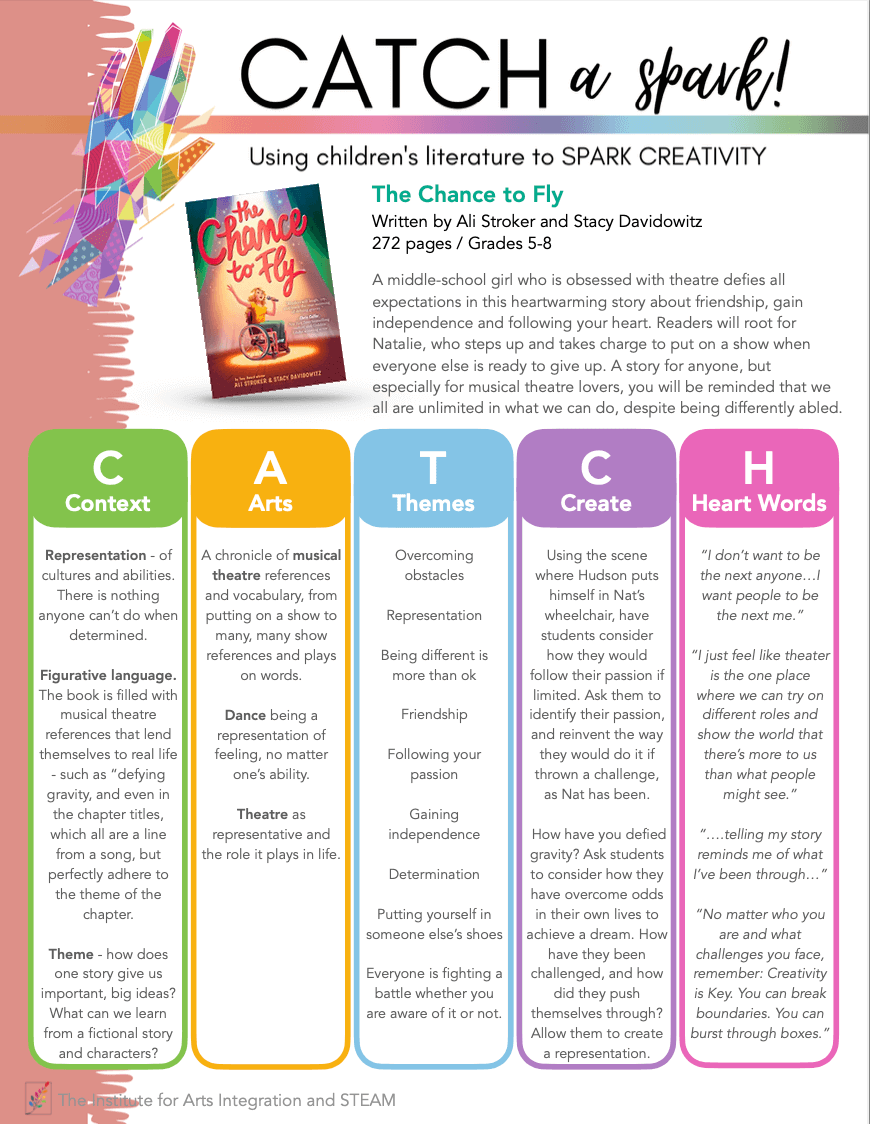 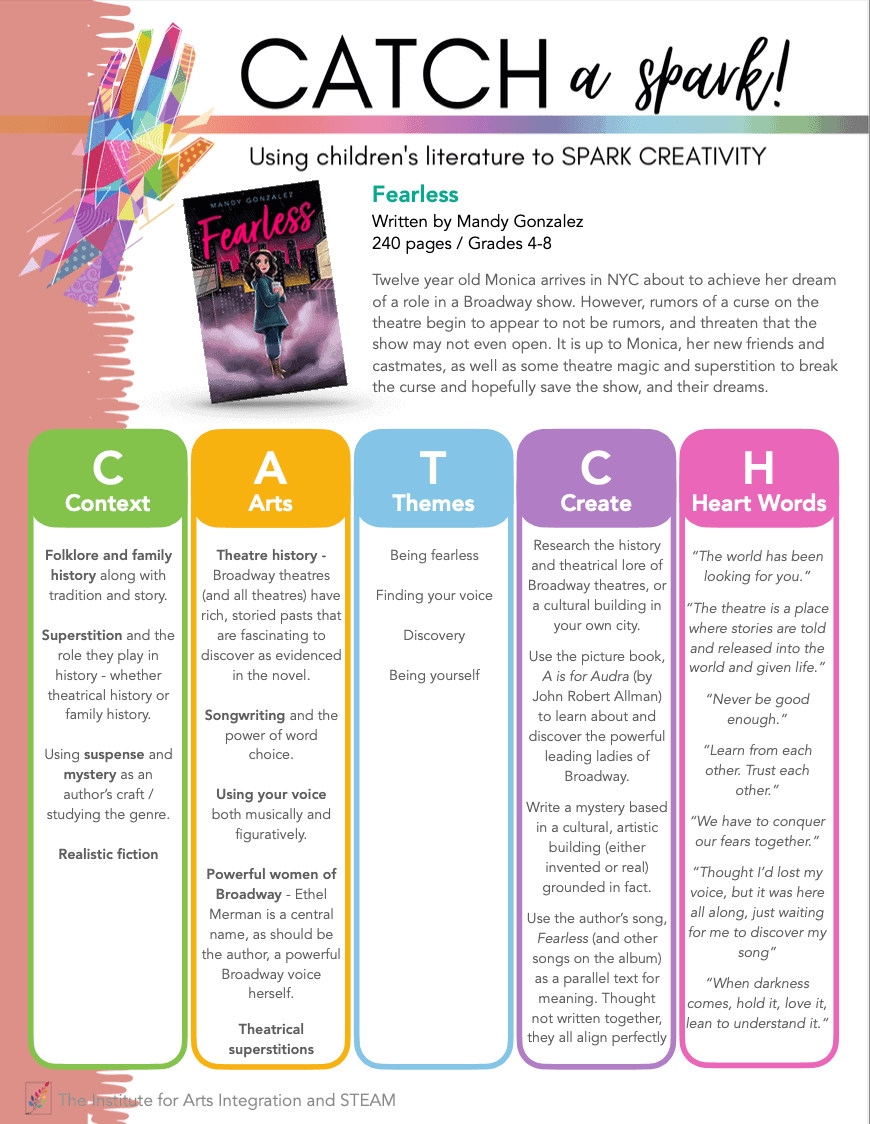 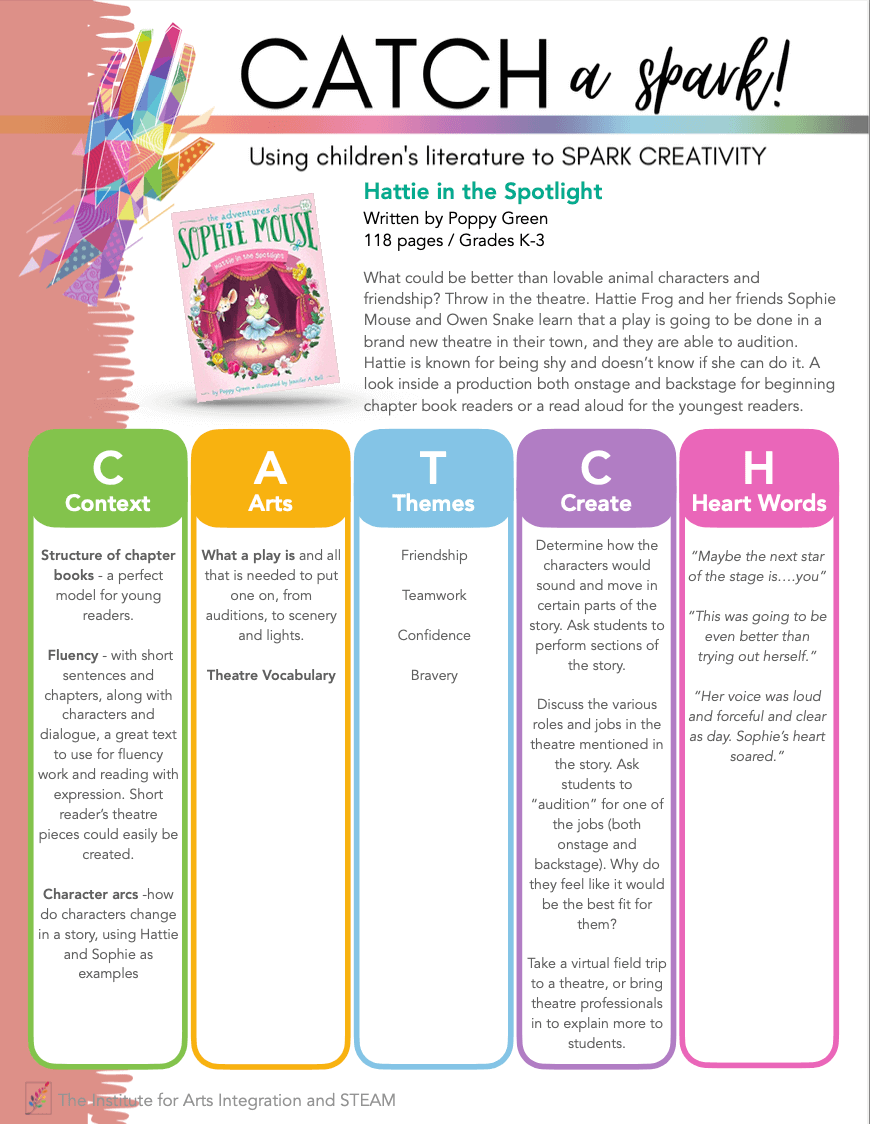 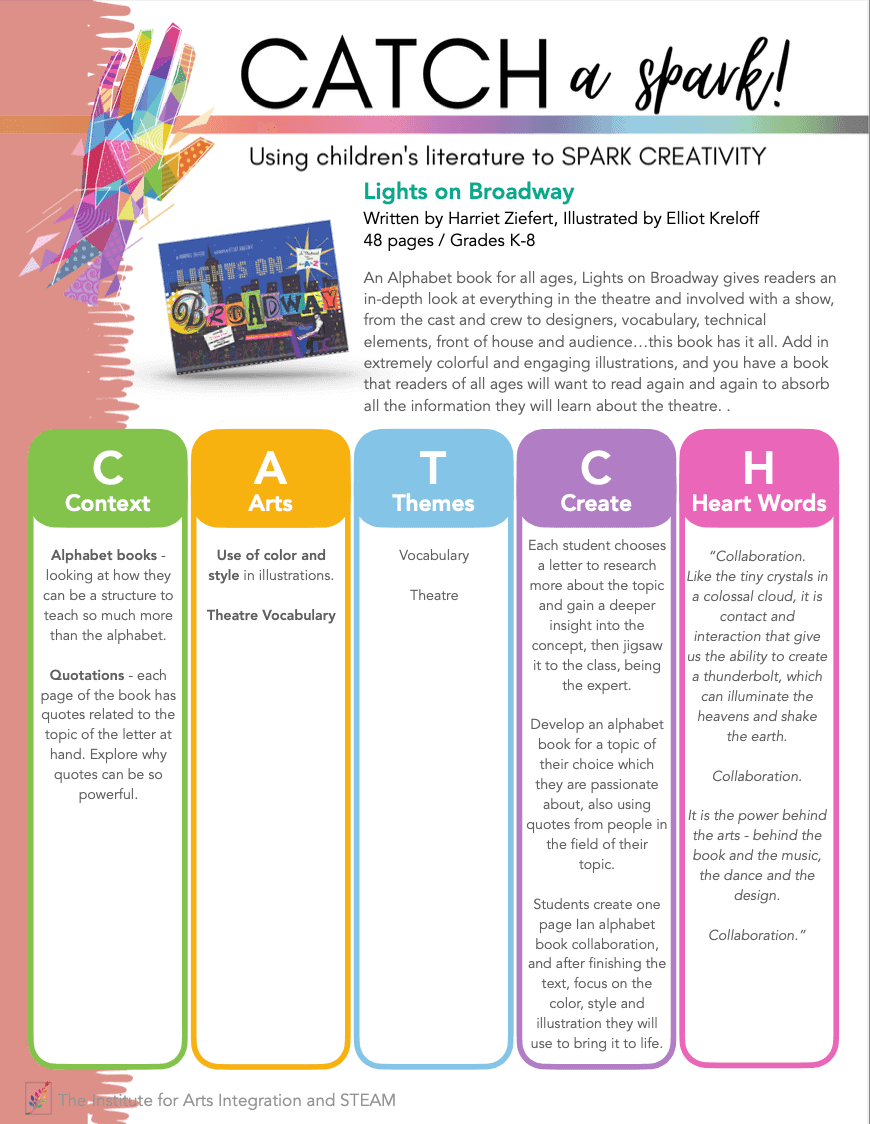 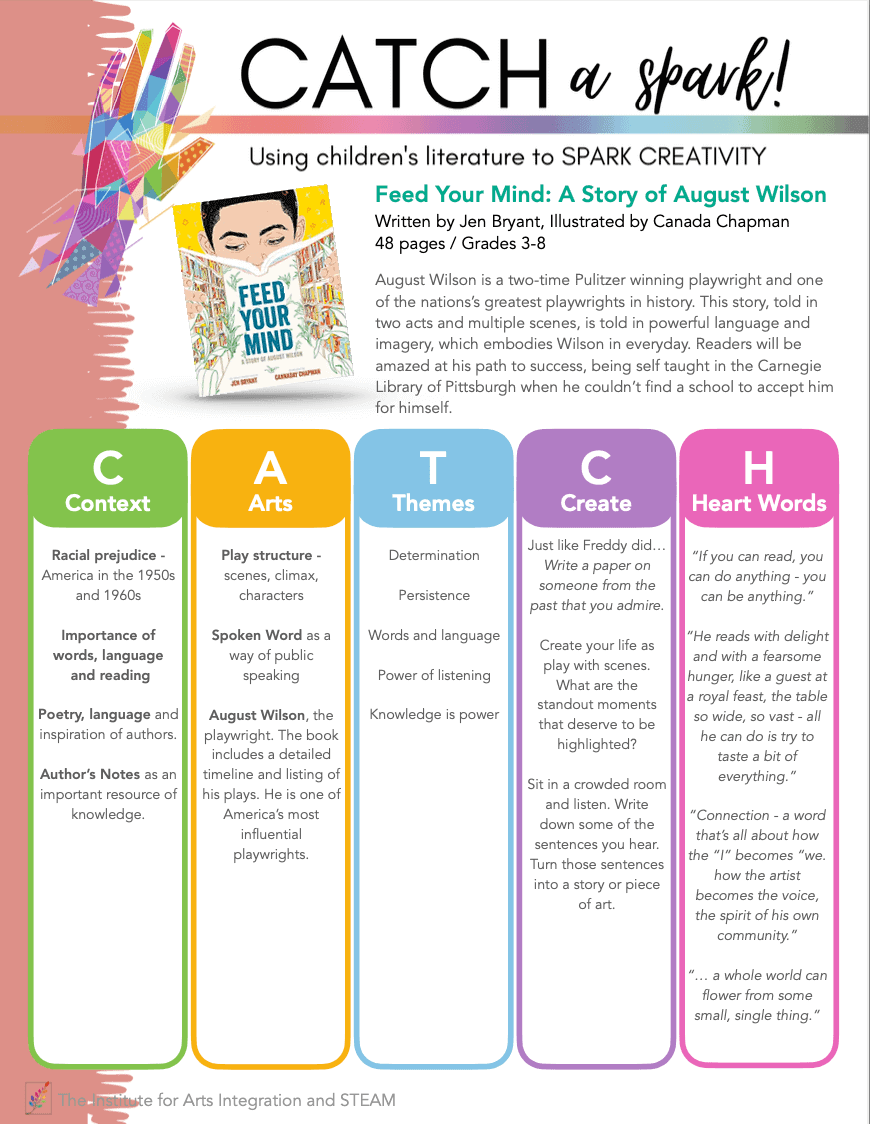 Theatre is universal and tells the human story. It is magical and brings a unique world to all those who enter its doors as a cast member, crew member or audience member. There are so many books about the theatre for young and middle grade readers. Use them as a way to open the doors of this truly special art form to your students of all ages.

Don’t be left in the dark – check out the previously published CATCH a Spark series!

Holly Valentine
Holly Valentine is the Director of Curriculum and Assessment for the Institute for Arts Integration and Steam. Prior to joining the Institute, Holly worked as an Arts Integration and Classroom Teacher for 20 years in a suburb of Rochester, NY. She is a certified Arts Integration Specialist and has served as an Arts Standards Writer for the New York State Education Department. Holly has been a recipient of the NYC Broadway League's Apple Award for her work in Arts Education. She also serves as the Director of Education for the Rochester Broadway Theatre League, where she has created nationally recognized programs and develops standards-based curriculum for touring Broadway shows in order to bring the theatre to classrooms and classrooms to the theatre. Holly holds both a Bachelor of Arts degree in Theatre and Psychology as well as a Masters degree in Education from Nazareth College in Rochester, NY,  where she currently lives.
Page load link