October is a month of magic and mystery… and what reader doesn’t love those two elements? Throw in some imagination and creativity to your everyday class schedule, and you have surefire wins. This month’s Sparks feature adventures we all would love to jump into. Don’t forget to download the individual Spark pages for a more in-depth look at each of the books. What magic will your imagination help you find this month?

Who has never imagined what life would be like if you were just five inches tall? Sure it would be tough and challenging, but not if the world you were heading into was scaled the same way! Enter The Thorne Rooms, 68 miniature models of European and American interiors from the 16th century through the 20th century, found at the Art Institute of Chicago. When 6th graders Ruthie and Jack find a magical key that shrinks Ruthie to just five inches, the adventure begins. She discovers a historical world to be entered and people to meet within the room. Not only that, but she is not the first person from modern day to have travelled back in time into the rooms!

With great resource material available on the real-life Thorne Rooms, this book makes an engaging read-aloud for third graders and higher. It’s also a book that will grab independent readers of all kinds. It is the first of a four part series, with each book highlighting different time periods. Ruthie has always felt as though she is waiting for something exciting to happen in her life. She just got her wish! Written by Marianne Malone.

If you have not yet found the magic and awe in Brian Selznick’s novels, it’s time! Selznick, an award winning author and illustrator is a master at weaving illustrations and prose. Well-known for his book, The Invention of Hugo Cabret, The Marvels is written in the same line. There is no way to read the book without reading the illustrations, which tell and advance a story of their own. There is so much within the illustrations… foreshadowing, sequence, highlighting, focus, perspective, and more. Equally as powerful is his prose. In this novel, two separate stories are shared – one through illustration, one through prose. Readers will instantly be drawn into the mystery of how the two connect, and why one abruptly stops.

Spanning 200 years, the stories also delve into the world of theatre, with a generational family of actors, allowing readers to see inside some of the earliest theatres. Readers will want to devour all of Selznick’s books after reading just one. Written by Brian Selznick.

After escaping from a situation that just wasn’t right, Carter finds himself doubting magic. For him, he has only ever known it to accomplish bad things. Even being a young boy, Carter is a master of illusion and knows quite a bit of magic. As he evades villainous characters in a new town after running away, he also finds himself in a band of new friends. Friends who have the same talents around illusion and magic that he does. Through their teamwork, they discover the advantages and benefits of magic, in a story that is ultimately about family, friendship and home. An added bonus? Readers will learn the secrets and how-tos behind a few magic tricks as they become magicians themselves.

Anything but Ordinary Addie: The True Story of Adelaide Herrmann, Queen of Magic

A name you have likely not heard, Adelaide Herrmann, longed for thrills at a time when such excitement was not conventional for young girls. She defied the odds in more ways than one from the very beginning of her life, on her quest to “astonish, shock and dazzle”. She would go on to become the first female magician. The illustrations in this book will absolutely pull readers in, causing them to observe deeply, and read pictures in a new way. There is much to discuss with this book. Alongside the idea that girls can do anything, the artistic style, color and word choices will add more important layers and lenses. Then throw in the captivating topic of magic, and you have a sure-fire hit among your readers.

As a young boy and an adult, Alexander “Sandy” Calder looked at the world through a different lens. He took odds and ends, manipulated them, and created sculptures unlike any other. One day he created a lion and ultimately went on to create a whole circus, with which he travelled through Paris. People came from near and far to see the “magical, moveable circus.” This book, with intriguing illustrations, will have readers begging to create as they are introduced to this artist most known for his three dimensional work and mobiles.

The work isn’t always clean and neat, and neither is what we see as a reader. Is this perhaps an homage to the messy mind of an artist and the idea that imagination isn’t always neat and clean? Written by Tanya Lee Stone.

Who among us hasn’t wondered what happens at nighttime? Does the unexpected from our wildest imagination come true? At the Midnight Fair, what happens when everyone has gone away for the night? The animals come out of the woods and a nocturnal world comes alive as the rest of us are sleeping. This wordless picture book will naturally have readers writing the story at hand, and thinking about the impossible becoming possible. Two important conversations to happen as a result of reading this book: the power of darkness and light and humans vs animals. Delving in further, readers can explore the ways they are seen, particularly when looked at through the last illustration.

While it looks like a simple, fun book on the surface (which it absolutely is!), there is much meaning to come out of the story for some of our younger readers. Written by Gideon Sterer. 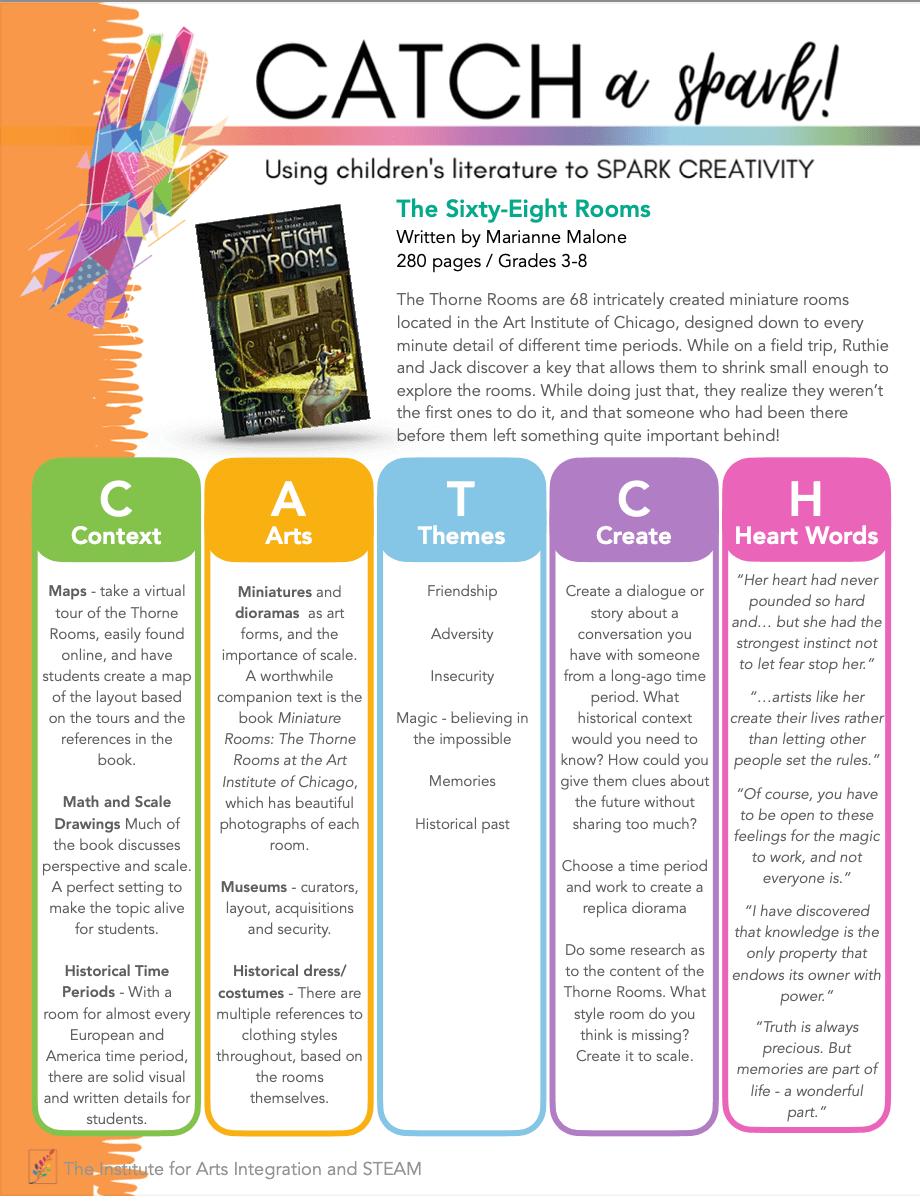 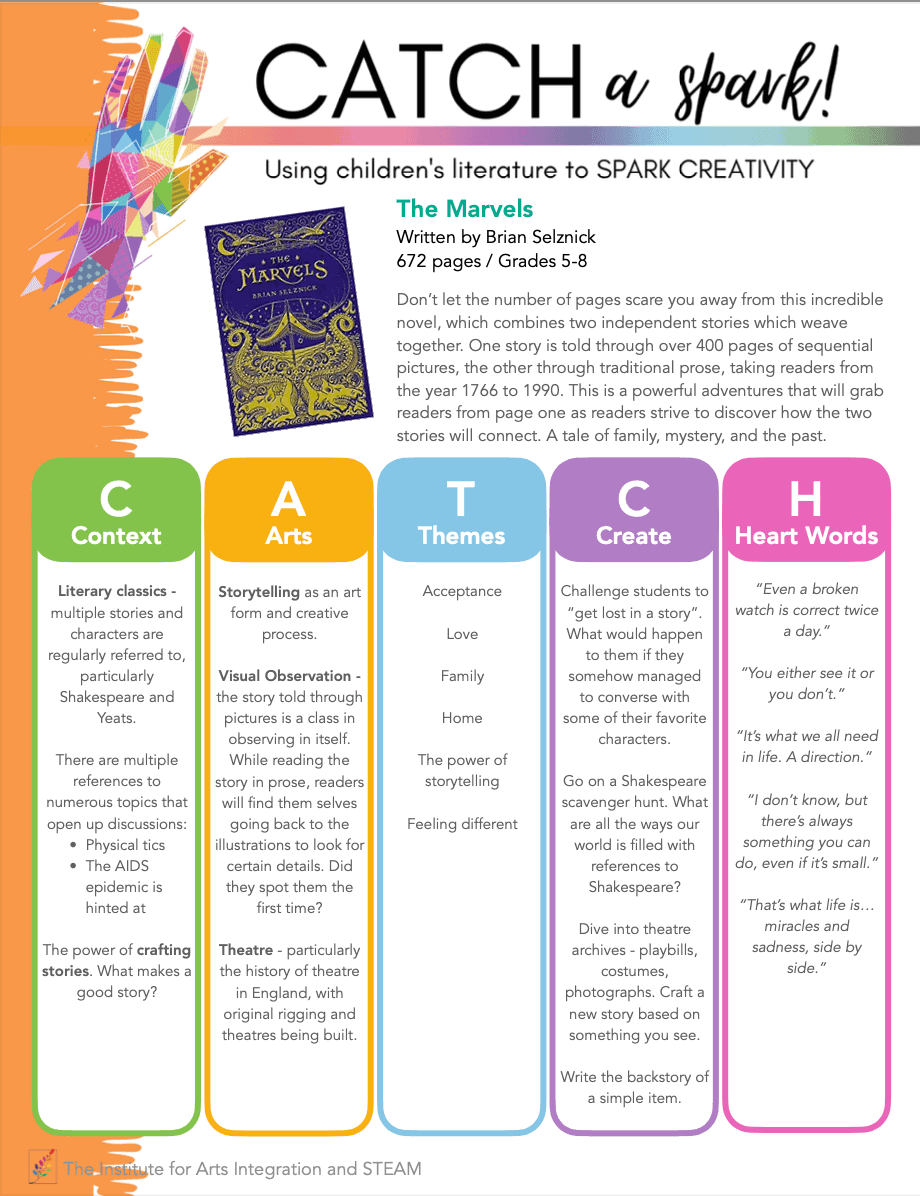 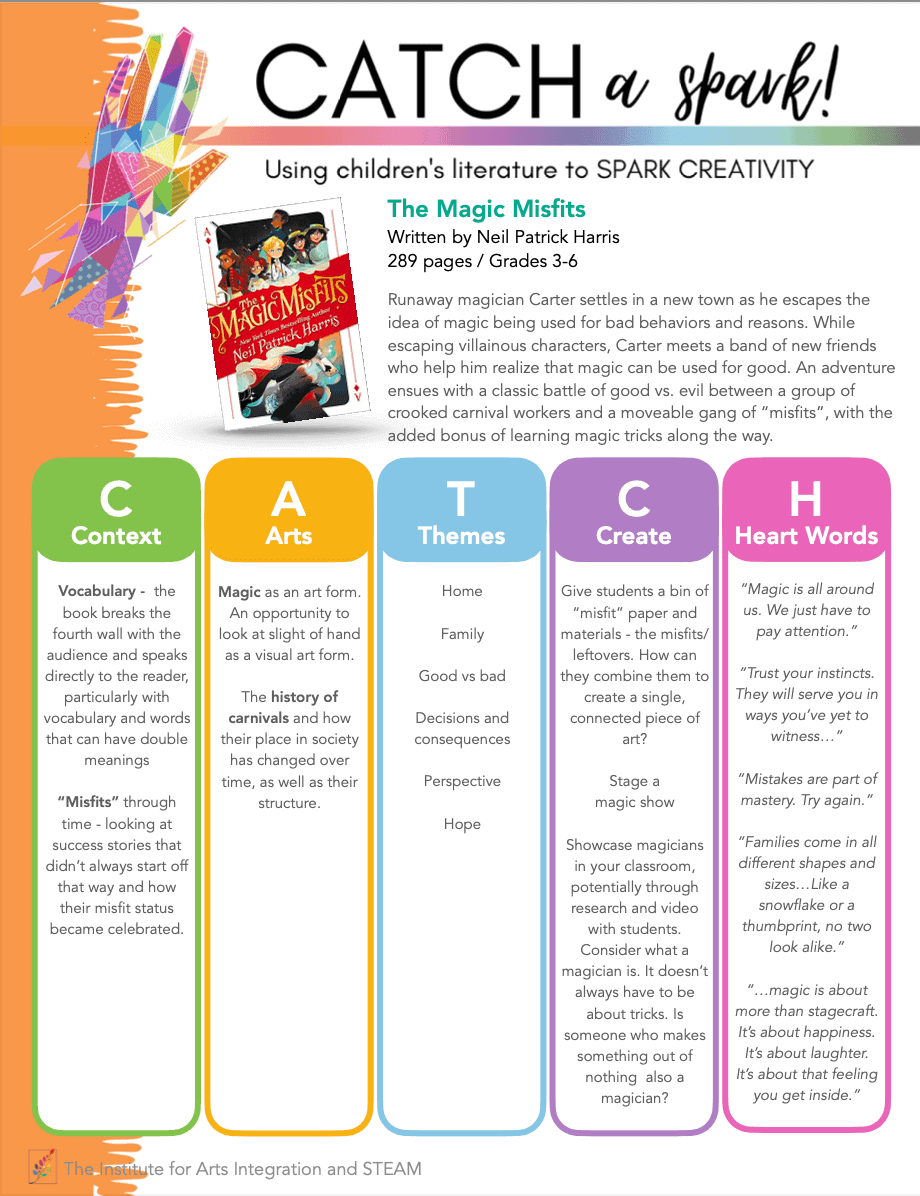 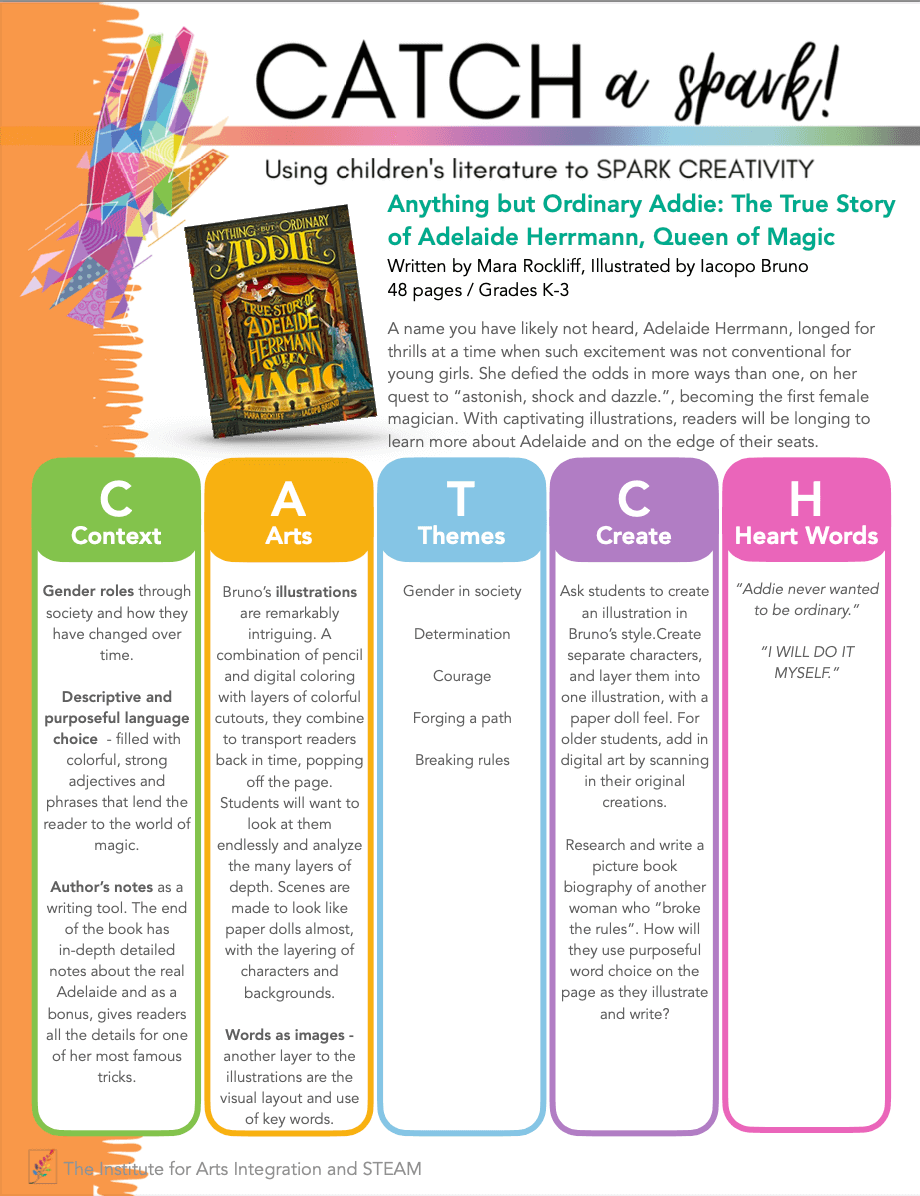 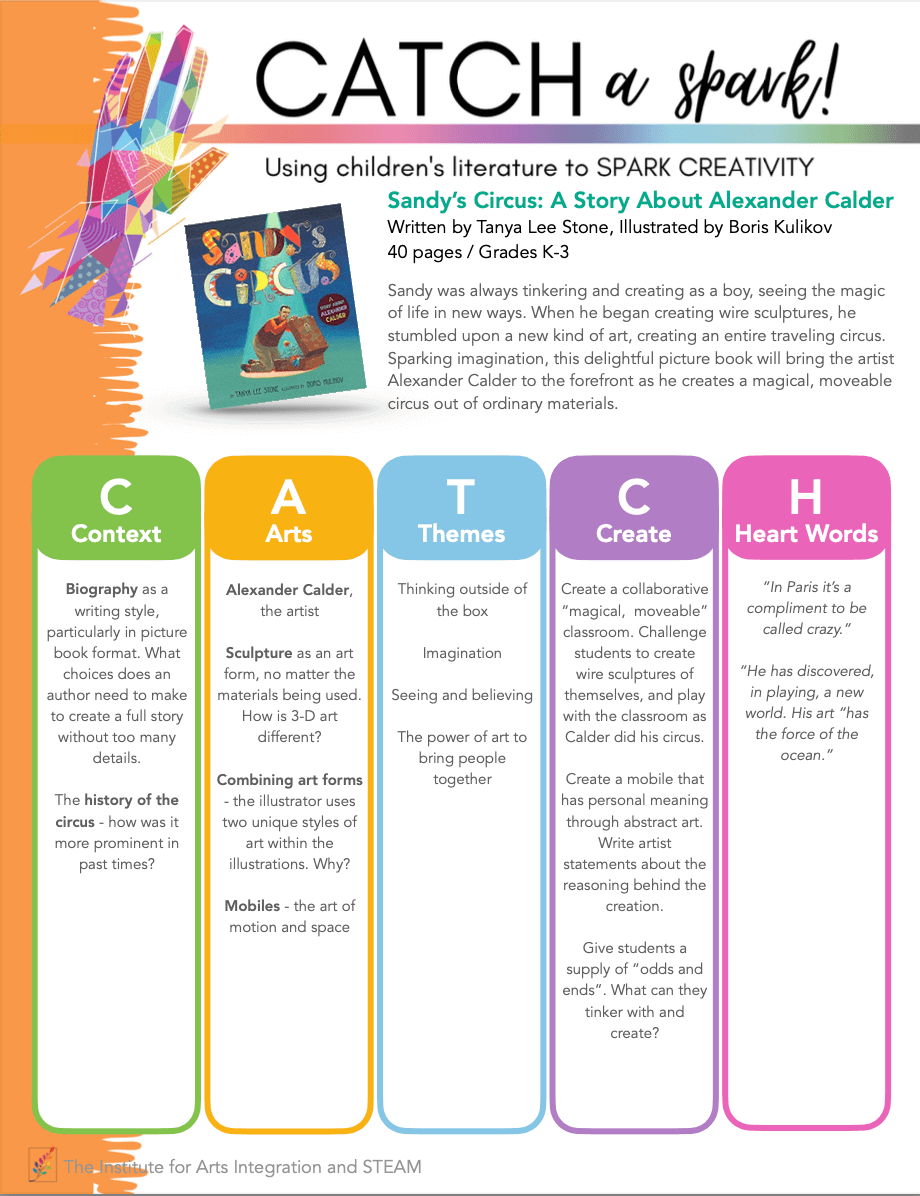 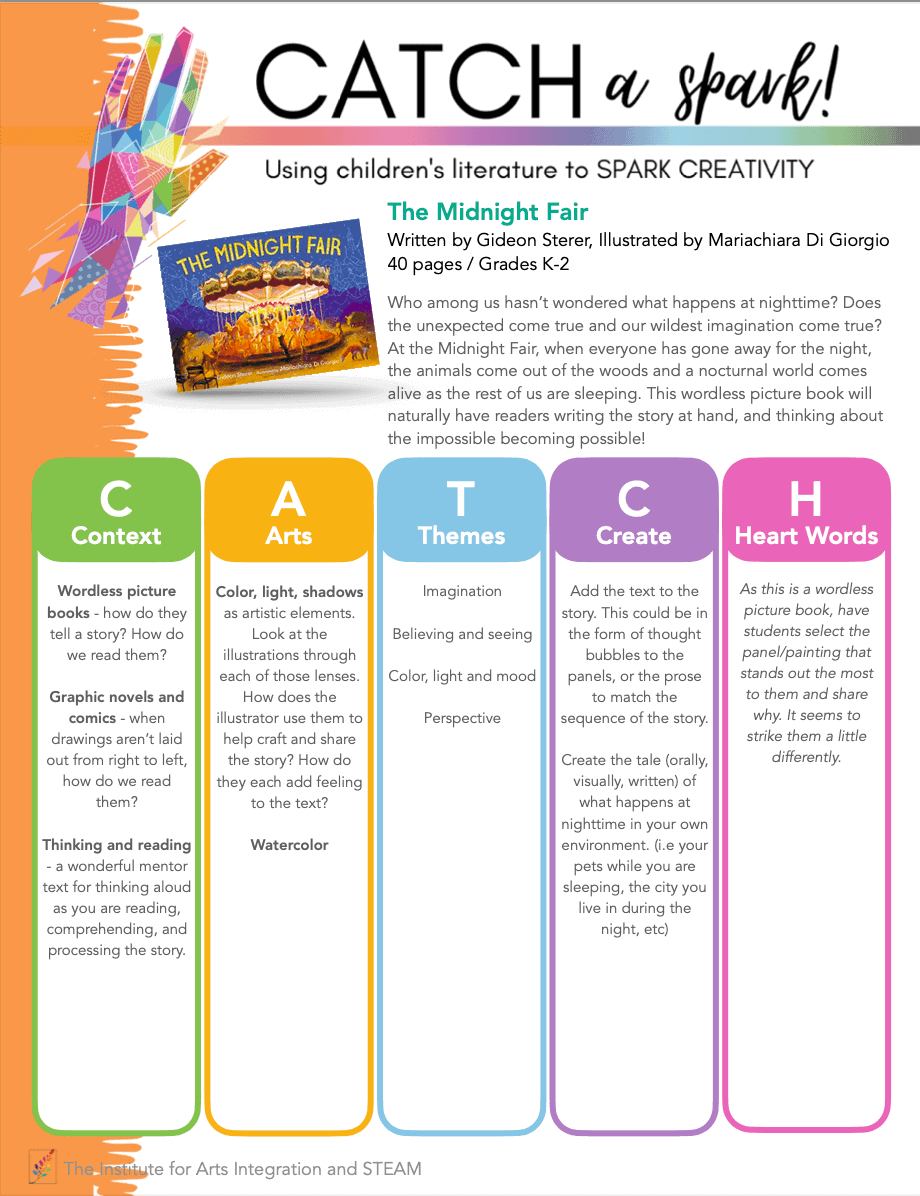 Magic and mystery are all part of life. We ride the balance of wanting to know the inner workings, yet don’t always want to spoil the illusion and happiness of the moment. Books help us recognize that magic and mystery, imagination and creativity abound. All it takes is one Spark.

Don’t be left in the dark – check out the previously published CATCH a Spark series!

Holly Valentine
Holly Valentine is the Director of Curriculum and Assessment for the Institute for Arts Integration and Steam. Prior to joining the Institute, Holly worked as an Arts Integration and Classroom Teacher for 20 years in a suburb of Rochester, NY. She is a certified Arts Integration Specialist and has served as an Arts Standards Writer for the New York State Education Department. Holly has been a recipient of the NYC Broadway League's Apple Award for her work in Arts Education. She also serves as the Director of Education for the Rochester Broadway Theatre League, where she has created nationally recognized programs and develops standards-based curriculum for touring Broadway shows in order to bring the theatre to classrooms and classrooms to the theatre. Holly holds both a Bachelor of Arts degree in Theatre and Psychology as well as a Masters degree in Education from Nazareth College in Rochester, NY,  where she currently lives.
Page load link

What's your Creative Teacher Type? Take the Free Quiz to find out!