How to Help Your Students Be More Creative

How to Help Your Students Be More Creative

Last summer I read the book Empower: What Happens when Students Own Their Learning by John Spencer and AJ Juliani. While the book inspired me in many ways (it’s a quick read– make sure to check it out), one of my main takeaways was the book’s description of creativity.

I clearly remember sitting with my principal a few years ago, trying to set my SMART goal for the year. I explained that I wanted to do something with Arts Integration or creativity, and she directed me towards something more measurable. “You can’t really measure creativity,” she shared. So I went a different direction with my goal and kept integrating the arts on my own.

Most people believe that we are either “creative” or “not creative”. If this is the belief, then it does seem like it is not measurable. However, if we look at “creative” as something you become, not something you are, it is very measurable. We’ve done a lot to combat the idea of being “smart or not smart” through the growth mindset movement, but I believe we need to start a creativity movement.  How are we, as teachers, helping students develop their creativity?

In order to help us step away from the “creative” or “not creative” mindset, the authors of Empower shared their ideas for Stages of Creativity. Before diving into their explanation, see if you can put the stages in order. Click here to try it: Stages of Creativity Quiz.

Spencer and Juliani realized that even if a student is not creating from scratch, he or she is on the way to doing that. Most people go through most or all of these stages prior to creating something new. Here are the stages, in order, according to the authors: 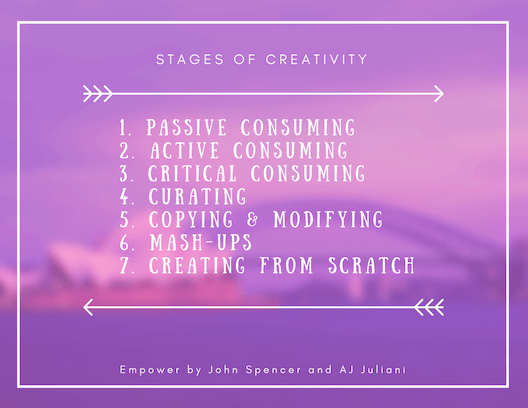 If we use these stages as a guide, we can see that a student who is copying and modifying, for example, is actually being creative, just at a lower level than a student who may be creating from scratch. We need to make sure that we are giving students experiences that allow them to work through these stages.

When scientists made a great discovery, they would record it and share it. Then, future scientists would use that information and build off of it to make new discoveries, rather than repeat the same experiment over again. In our science journals, students write and date their ideas in pen to “patent” them.

I’ve had to train students to share their ideas in this way. Students used to tattle on one another for “stealing ideas” or the all-too-familiar, “So-and-so is copying me!” I’ve taught students how to refer to those original “patents” to give the other student(s) credit for the idea.

Students know that if they’re using someone else’s idea, they need to cite the original source. They also need to explain how that idea helped them to formulate their own. Third graders never used to be appeased by the saying, “Imitation is the highest form of flattery.” Now, if a student’s idea is cited and iterated, he or she really is flattered.

This idea of creatively borrowing has helped in math, too. When I was in school, there was a strict no copying rule. Of course, we don’t want students to do blatant stealing of someone else’s brain power.

However, if someone else is doing something that’s working and you are stuck, watch the person who is being successful. We may gain ideas to help us get started. I use this Pixar short to demonstrate and share this idea with my class.

Without observing, learning from, and getting assistance from the armadillo, the llama would have never made it across that road. This is a stage of creativity and we should encourage students to notice and work through the levels, rather than deeming a student “not very creative”. Students may learn from another student quickly, allowing them to progress more quickly to a higher level of creativity the next time.

Are you looking to measure creativity? There ARE resources out there! Check out these articles and rubrics. If you need a SMART goal, creativity is an option for you. Also, check out author Brianne Gidcumb’s great ideas and rubrics for assessing creativity.

Dyan Branstetter
Dyan is a fifth grade teacher in a public school district in Lancaster, PA and has over 16 years of classroom experience. With a Masters of Science Education and a passion for dance and music, she strives to integrate the arts into the curriculum whenever possible. Dyan has a background in teaching advanced learners, and is devoted to using project based learning to help her students achieve 21st century learning skills and master the PA Core Standards.