Team Challenges: Why and How I Implemented This in My Classroom

Team Challenges: Why and How I Implemented This in My Classroom

Back in July, there was a post in the Arts Integration and STEAM Think Tank on Facebook about using Team Challenges in the classroom. I’d never heard of such a thing before and began asking questions. I learned that Team Challenges is a book by Kris Bordessa that outlines over 170 group activities. These are simple activities where students work with a team to solve a problem, build something, act out a skit, brainstorm lists, and much more.  So, I ordered the book and set to reading it.

As I read through the first part of the book, I noted the pointers on how to effectively get kids to work with teams. These included things like simply talking with the students about how there is usually more than one way to solve a problem. There are other tips in the text, but I don’t want to give away all of the author’s nuggets of wisdom.

However, I do want to share with you why and how I made this work in my classroom.

I have noticed over the years that my students really struggle with working together on projects. I’m a pretty keen observer and made an effort to take notes on what I thought was hindering my students in this area during the last two months of school last year.

After reviewing those notes, I came to the conclusion that a lot of my students really just didn’t know how to make decisions with other people and share materials. Something as simple as taking glue out of a basket to use can be difficult when students aren’t mindful of waiting their turn.

Students don’t always know how to do these types of things. Social skills like these don’t always come naturally to students either. So, I decided I wanted to find a way to help them.

That’s the whole reason that I got involved in the Facebook conversation about Team Challenges. Knowing I wanted to work on social skills with my students made the concept of teamwork intriguing to me.

All of that, though, wasn’t enough to sell me on the idea of using the book in my art classroom. I needed to make sure that whatever I implemented would be strongly connected to the art curriculum that I am required to teach.

Now, page 1 of the book addresses creativity as a thought process that impacts our daily lives. Examples given of how creative people, like Henry Ford and Bette Nesmith Graham (White Out), have changed the world.

This was the connection I was looking for! Creativity and collaboration builders in the form of short games students can play as a team.

Perhaps the most important thing I did was tell the students that I was their coach. I told them that some coaches will tell their teams what to do, yell at them from the sideline the whole time they are trying to do it, and then tell them some more of what to do once the clock stops. Also, I explained how I am not that kind of coach. I told them I would coach them upfront by telling them what to do. Then, I would start the clock and not say another word until it stopped. Finally, I would coach them after the clock stopped based on my observations. While the clock is running, they have to rely only on their teammates. After they did the first Team Challenge that was so difficult, I coached them on things they could do differently. Then, they tried two or three more Team Challenges before the class period was over. I intentionally chose easier ones, but it gave them the chance to try out the pointers I’d given them. The second, third, and fourth Team Challenges they did that day went well for them.

It did take some time to get this set up in my classroom. Like I said, I spent the first couple of weeks with my students going over the agenda. Then, I spent one whole class period teaching them about how to participate in the Team Challenges. It was absolutely worth it to put that time in upfront. Now, we can move through the first part of the agenda (Bell Ringer, Motto, Team Challenge) in less than ten minutes without any drama! Then, we have the rest of our class time, which is between 30 and 40 minutes, to make actual artwork.

My students are loving it and so am I. I can attest that it is helping them learn to communicate with each other. It is also helping them think more creatively. It is a great warm-up activity! I recommend this for any visual art classroom and for any Arts Integration or STEAM classroom. Having taught in a regular-education arts-integrated classroom for many years before becoming an art teacher, I really believe that Team Challenges would benefit students in that setting as well. After all, we want our students thinking creatively and working together in those classrooms just as much as we want it in the art classroom.

I hope you will consider implementing some form of teamwork into your classroom. I also hope my tips will help you and your students be successful. 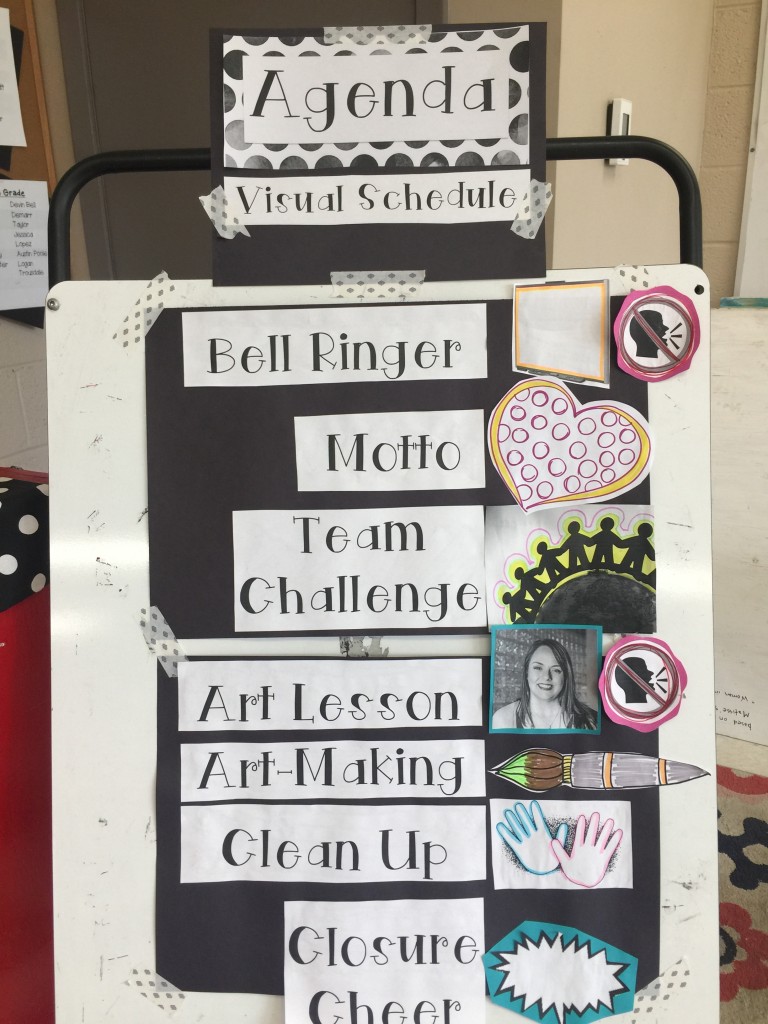 This is a photo of the Agenda or Visual Schedule that I am using in my classroom. I have images as well as text to support students who are learning English a second language.

Amanda Koonlaba
Amanda Koonlaba, Ed. S. is an educator and educational consultant with over 12 years of experience teaching both visual art and regular education. Her career has been driven by the power of the arts to reach all learners. She is a published author and frequent speaker/presenter at education conferences. Amanda was named the Elementary Art Teacher of the Year for the state of Mississippi in 2016 and received the Arts Integration Service Award from the Mississippi Whole Schools Initiative (Mississippi Arts Commission) in 2015. She holds an Elementary and Middle Childhood Art certification from the National Board for Professional Teaching Standards. As a coach for The Institute for Arts Integration and STEAM, Amanda is on a mission to ensure every student in America has access to a high-quality arts-based education. She blogs at SimpleArtClass.com
Share This