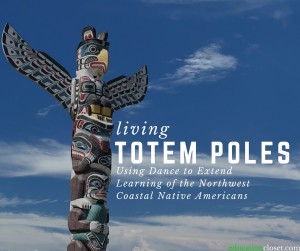 A few years ago, I taught an Arts Integrated unit on Native Americans. I was fortunate to team-teach much of this unit with an artist in residence — a great unofficial professional development opportunity for me. One of my favorite activities was her idea of having students create “Living Totem Poles”, which was an extension of our research on the Native Americans of the Pacific Northwest. Students used their knowledge of totem poles and dance to create human works of art.

These living totem poles worked well as a class activity, but they also became part of a performance. We did this activity with three classes, and each class took turns doing a gallery walk of the totem poles.

The Process On Living Totem Poles:

Before building the totem poles, we began by talking about how our face can show what we are feeling without using any words. I showed some faces from sample totem poles, and students predicted what that expression may have meant. Then, each student tried to show that emotion on his or her face. We then talked about using our arms along with the emotion. Students were told to think of animals that would have been carved when doing their arm movements. We tried freezing an arm/face pose and showing an expression while moving our arms. The hardest part for the students is to stay “in character”, especially while other students are watching. It takes a lot of work to keep the sillies at bay during this exercise, but it is great practice in self-control.

Break the class into groups of three. Student groups stand single file, and the student in the front sits criss-cross, the person behind kneels, and the person in the back stands. The student’s trios position themselves as close together as possible to give the effect of three faces stacked on top of one another. Once students are in their places, use a large drum to beat a slow, steady beat. If a drum is not an option, a piece of music such as this would work just as well. Every four counts (or 8 counts, depending on the tempo of your beat) students change their expression. For the first four counts, students show an expression using only their face. For the second four counts, students change to a different expression and add a frozen arm movement. For the third four counts, students choose a 3rd expression, but this time, they move their arms to enhance their expression.

After playing around with the expressions for a few minutes, each team meets together to choreograph their living totem pole dance. Really, groups only need to plan so that they can each think of three different expressions, and so that they are not doing the same expression at the same time. They might also decide how to use their space during their arm motions. One student could choose to place his arms high, another out to the side, and another in front.

After students have had time to practice, try performing it with the drum beat or music again. At this point, students groups can perform for each other one by one, or the whole class can perform at once while another class walks by to observe. Either way, it is a great opportunity to explore movement while learning more about Native American history and culture!

Dyan Branstetter
Dyan is a fifth grade teacher in a public school district in Lancaster, PA and has over 16 years of classroom experience. With a Masters of Science Education and a passion for dance and music, she strives to integrate the arts into the curriculum whenever possible. Dyan has a background in teaching advanced learners, and is devoted to using project based learning to help her students achieve 21st century learning skills and master the PA Core Standards.
Share This