Yes, and: Teaching Students to Improvise

Yes, and: Teaching Students to Improvise

“Yes, and” is a popular improvisation exercise and is a guiding philosophy for the famous improvisation troupe out of Chicago, The Second City.  The organization has created an entirely new aspect of the business called The Second City Communications specifically devoted to corporate training and marketing.  As is stated on the website:

No joke, improvisation is about more than being funny.  The skills our actors need to be successful are the same skills businesspeople need to be successful.  You need to be able to listen, think on your feet, create and innovate quickly, communicate powerfully, and work well in a team when the pressure is on.

“Yes, let’s!” is a way to physically warm up the body, let students feel the power of making a suggestion and having it be accepted and acted upon by their peers, and give the students practice in accepting the ideas of others.  To begin have all students stand in a circle.  Go around the circle allowing students to take turns giving a suggestion of a physical activity that all students can do (brainstorming a list of possibilities is a good idea the first time you try this to avoid wait time between students).

Set up parameters about use of space (all done in self space) and physical limitations of students (you may be able to do a handstand but I can’t!) as well as a time limit (like having the students count to 5 while they perform the movement).  The first student might say, “Let’s do jumping jacks” and the class responds in unison, “Yes, let’s!”  Students can count to 5 in unison as they perform the jumping jacks.  The next student then offers an idea like, “Let’s be fish swimming underwater” and again the class responds, “Yes, let’s!” and performs the movement while counting to 5 (or repeating “glub” 5 times!).

Once all have warmed up and had the practice of accepting the ideas of others, they are ready to try, “Yes, and.”  The idea of improvisation is that you always accept the premise suggested by your fellow actors and you run with it.  If I say, “I really like those shiny yellow boots you’re wearing” and you respond, “I’m not wearing yellow boots” I and the scene have been halted.  By having the students say, “Yes, and” the students have a built in method of accepting and including ideas offered by others.

Start as a whole class and give the students a role in a scenario.  Perhaps they are architects building a mansion for a famous athlete (“Since he is a basketball player we should build a basketball court” says the first student.  “Yes, and we should build a track around the outside of the court so he can run.”).  Perhaps the students are designing an amusement park for children (“We should build a roller coaster.” “Yes, and it should do loops.”)  As students become familiar with the game you may be able to break them into smaller groups or pairs and give them scenarios to try out or allow them to brainstorm their own scenarios.  These can be as realistic as making plans for after school or as fantastic as planning a voyage to outer space. 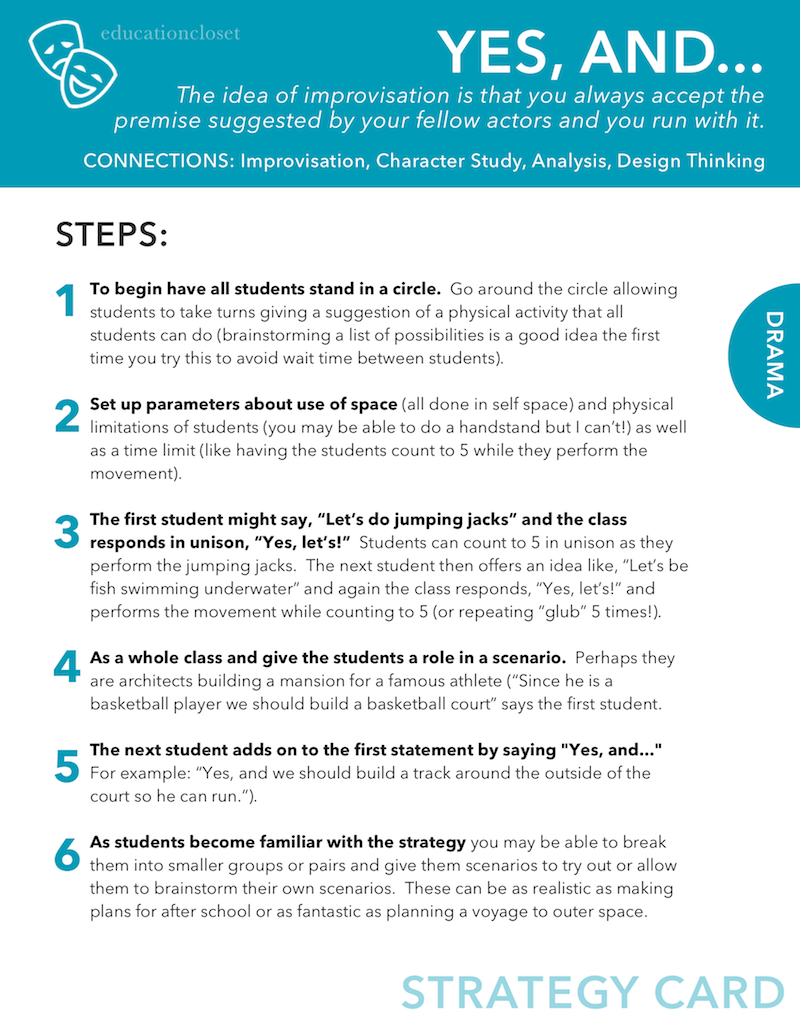 By practicing the simple phrase, “Yes, and” students can learn to cooperate and work as a team, to think on their feet, to spontaneously problem solve, and to gain confidence in their own ideas.  Once they have an understanding of improvisation in theater they may be ready to take on music, visual art and dance.  Go forth and improvise!

Deirdre Moore
Deirdre is a teaching artist and AI coach in the San Diego public schools dedicated to helping classroom teachers make arts an integral part of their teaching. Deirdre has an MEd in Arts Integration and over twenty years of classroom and performing arts teaching experience. Email Deirdre.
Share This